How many items should be included in a live auction?

END_OF_DOCUMENT_TOKEN_TO_BE_REPLACED

Home  /  Winspire News  /  How many items should be included in a live auction?

How many items should be included in a live auction? 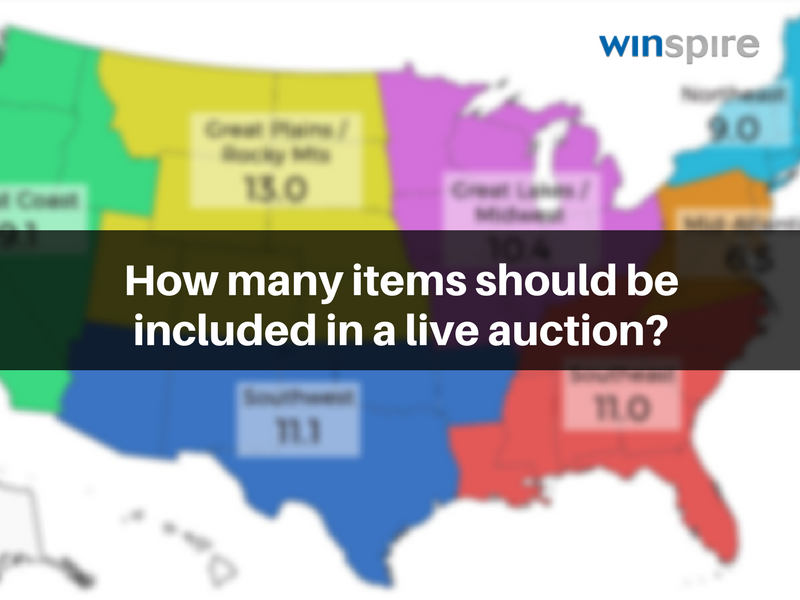 "Dear Winspire, How many items should we put in the live auction portion of our fundraising gala? We usually have around 125 guests. Last year, we auctioned off 17 items and the coordinator said it was way too many – that people lost interest by the end. Do you have any suggestions before Monday's auction meeting?" - Nancy B., Indiana

This is one of the most common questions we get: What's the right number of live auction items? Too few, and you've left money on the table. Too many, and you risk losing the crowd's focus.

What's the best number of items in a live auction?

Most traditional auction fundraising events, like galas and dinners, include 7 to 12 items.

That said, there's plenty of nuance to the best number for your event. Below, learn the five most important factors that influence how many packages to put together: time, geographic region, event type/size, the "80/20 rule," and your fundraising goals.

We recently asked webinar attendees how many items they'd ideally include in their live auctions. 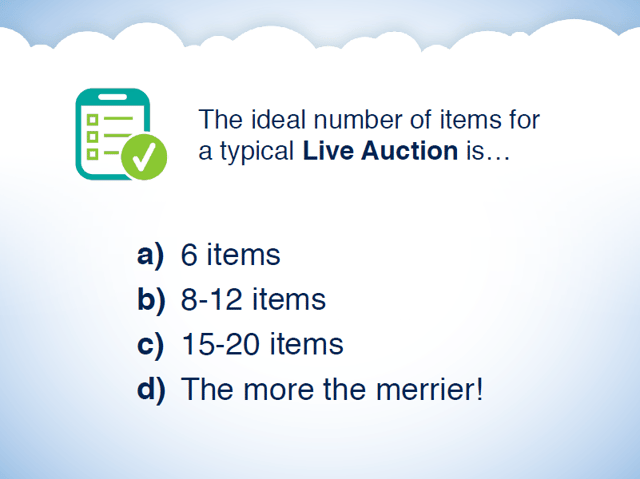 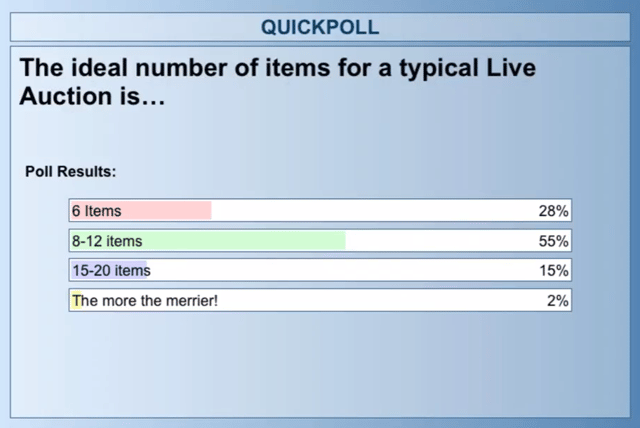 As most people indicated, we typically recommend using 7 to 12 items in the live auction. Where you fall on that spectrum depends on the following five factors.

In a charity fundraising event, the night's agenda and timeline are priority number one. How much time do you want the live auction to occupy within the rest of the evening?

To prevent guests from becoming restless - and the auctioneer losing control of the room altogether - we typically encourage keeping live auctions within the one hour mark.

A typical live auction item takes between 3-5 minutes to sell (sometime more, sometimes less). So do the math: Divide that amount of time you want to devote to the live auction by 3.5, for three and a half minutes.

If you have 10 items in the live auction and they each take 5 minutes to sell, that puts you at 50 minutes. This gives the auctioneer a 10 minute cushion to do the fund-a-need; switch gears to a raffle announcement or game; or just have a little fun with the audience.

"I used to say three minutes per item, but I find that three minutes feels like it’s rushing just a little bit," notes benefit auctioneer and webinar guest Scott Robertson. "It’s okay to take less time, but not to go over the allotted time."

Experienced benefit auctioneers can unload more than a dozen items in under an hour: sometimes 15 or more. This can be an exciting whirlwind of activity, but most events do fine in the middle ground with 8-10 items. 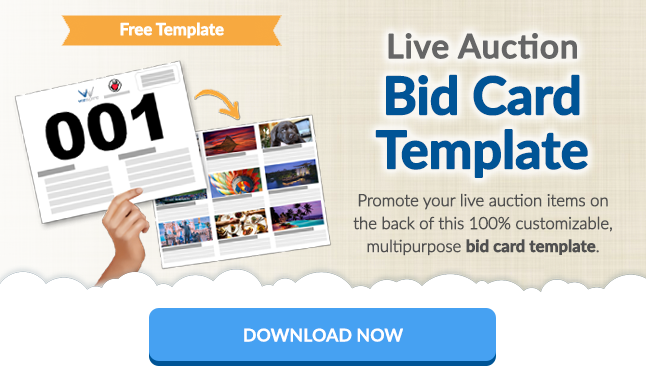 Another important factor is the area of the country in which you're located.

To test this theory, Robertson conducted an informal Facebook poll among U.S. auctioneers. Among dozens of responses, here's how they broke down by region... 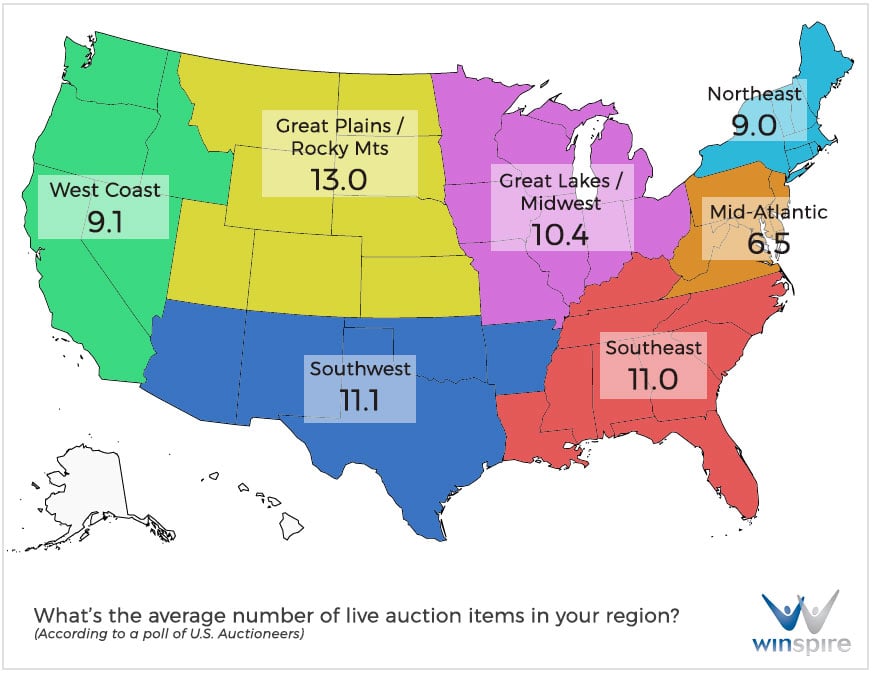 "I often say that auctions are like snowflakes: No two are alike," Robertson adds. "So what works in Naples, Florida may not be the best idea for Des Moines, Iowa."

Bigger or more urban regions are more likely to have the bigger galas, which can meet live auction revenue goals with fewer items. This brings us to our next point: different event types.

Most big galas include 7 to 12 live auction items. So where might your event differ? 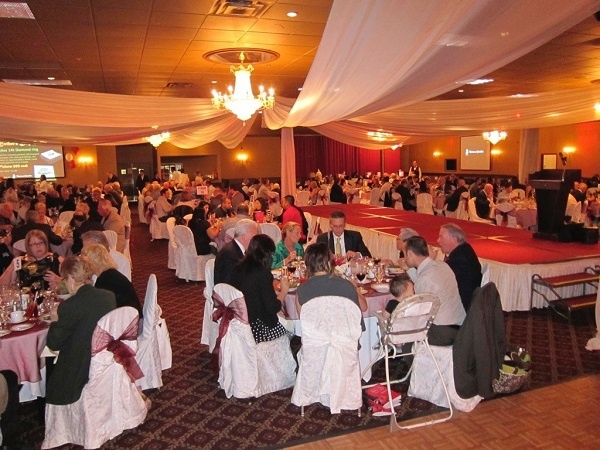 As noted in the webinar poll, some events auction off fewer than 7 items. In fact, an estimated five percent of events auction off 3 or fewer items, which we do absolutely see sometimes. Mostly this is due to time constraints, because people don’t want an event to go on for too long.

Another said, "The bigger the gala, the fewer the items."

Golf tournaments tend to keep auctions short as well. After a long day outdoors, it makes sense to limit live auction items to a few golf trips or rounds on a private course.

Bottom line: You're already going to all the trouble of hosting a charity auction! Make sure putting up just a handful of items is worth the effort.

Smaller events (say, those benefiting illnesses, volunteer departments, the church and so forth) tend to auction off more items than the big galas.

Here, a few thoughts from benefit auctioneers responding to the survey... 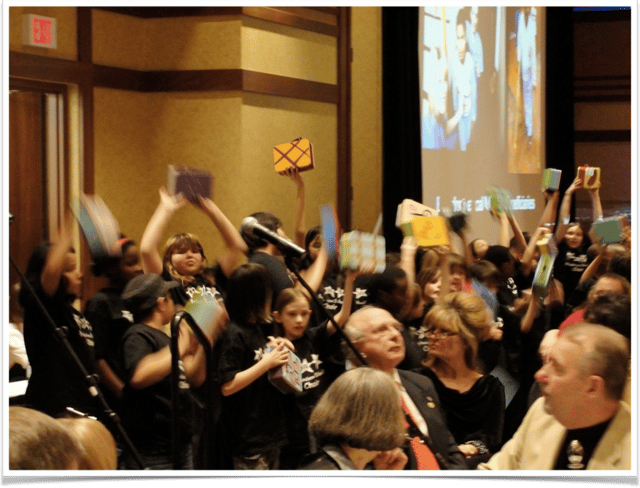 "I do a lot of wine festival auctions," adds Robertson. "They’re typically held in the afternoon, and we have 40 items in the live auction. But you have to realize, that’s when the live auction is more part of the entertainment than at your typical sit down gala that you’re going to have in the evening."

Other auctioneers noted seeing more interactive revenue generators, like 50/50 raffles and the Run Around game, to create a better giving experience for all involved - as you'll see in our next point. 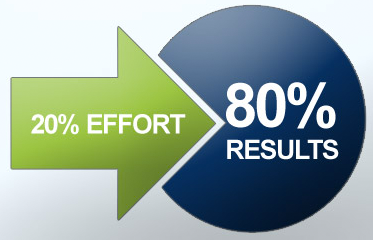 For charitable organizations, many find that 80 percent of annual revenue comes from 20 percent of the donor base.

In a live auction, the disparity can be even greater, with 10 to 20 percent of guests participating.

As we discussed in a recent post about feeding your auction's top tier of spenders, it's in your best interest that the large majority of your audience not be able to afford the premium live auction items. If you've procured the right caliber of items, most people will only participate only as spectators.

Nonetheless, you don’t want to have the live auction drag on and bore the rest of your audience.

"When I was a child, my aunt and uncle used to invite us over for Christmas," Robertson shares. "They had some very well-to-do family members. As Christmas presents were exchanged, they were passing out Rolex watches and mink stoles amongst themselves - this was the '70s. We were a bunch of country kids hoping to get a jack in the box. So it wasn't all that fun much fun to sit on the outside watching everyone fuss over high-end items."

Same goes for a live auction. "You have to think about the whole audience. It's a fundraiser, so you don’t have to have something for everyone, but every fundraising event is also about audience development," Robertson adds.

You never know who may be coming in to your event that night. They may not buy something this year, but a positive experience sets them up to support your cause with a purchase in the future. 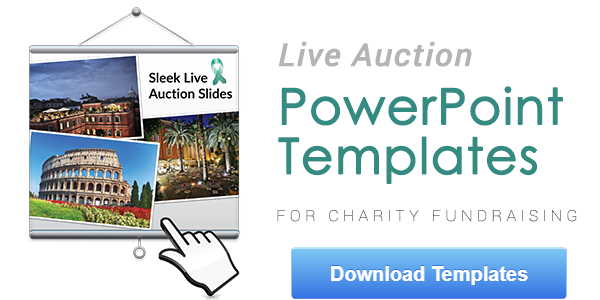 The final factor to determine the right number of live auction items for your event, and to guide procurement in general, is your financial goals. What do you hope to raise, and what is the capacity of the people in the room?

A note on giving capacity: Take care not to underestimate your guests' spending capacity. Many of our nonprofit clients have shared testimonials of offering no-risk travel items they assumed were out of their donors' price range - only to end up selling multiple times.

It's all about presenting the right package at the right time. The better you know your donors, the better you can offer delightful items that appeal to the highest end of their price range.

Your turn - How many items have you found works best in a live auction? What's the most common amount you've seen in your region? Let us know in the comments below!